Luci Christian
Mio (ミオ, Mio) was a young girl who lived in an abandoned temple with orphans who lost their parents in the war. In order to provide food for the children, she serves both of the warring clans during night time as a prostitute. She was Hyakkimaru's love interest.

She was killed by troops sent by the order of Hyakkimaru's father, Kagemitsu Daigo on suspicion of her being an enemy spy.

Mio is a dainty lady with long brown hair that curls at the edges, and brown eyes. She has her bangs laid across her face which reaches her mouth.

She wears a frayed red kimono with white flower patterns.

Mio is kind and caring as she tends to put others in priority instead of herself. Although her job is difficult, she is determined to work harder and give the best for the orphaned children, serving them as a mother-figure.

As mentioned, she is not ashamed of her job as long as she can earn from it. However, she does have a tendency to refer to herself as "Filthy" because of it, even telling Hyakkimaru not to look at her in fear of her soul's color being filthy, despite it actually being a pure color.

"How strange. I don't loathe these hands." ― Mio to Hyakkimaru in Episode 6

Mio took care of Hyakkimaru when he was injured and also provided him and Dororo shelter at the temple whilst his recovery. Often times Mio will sing songs to sooth Hyakkimaru's pain. Her kindness led Hyakkimaru into falling in love with her and furthermore confessing his feelings towards her. Feeling insecure, Mio tried to shake Hyakkimaru off seeing that she was too "impure" for him. Nonetheless, Hyakkimaru still loved her. Unfortunately, during a time when Hyakkimaru was away, his father, Kagemitsu Daigo deployed troops and killed Mio and all of the children residing in the temple, in which was suspected as enemy spies. Her death has caused Hyakkimaru to go on a rampage and slaughtered almost all of Daigo's men to avenge her death.

"It's okay, I'm not ashamed about it." ― Mio talking to Dororo about her "work" in Episode 6

Take and the orphaned children

Mio is the caretaker of all the orphans living in the abandoned temple. When she is out for work, Mio will entrust the responsibility to Take until she returns. Despite not being blood-related, she considers herself and children to be a big family who looks out for each other. Sadly, She and the orphaned children were killed by Kagemitsu's troops allowing their deaths cause Hyakkimaru consumed with rage and slaughtered the troop except for the one-armed man who escaped. 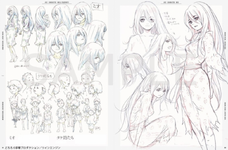 Reference Image of Mio and the orphans

Community content is available under CC-BY-SA unless otherwise noted.