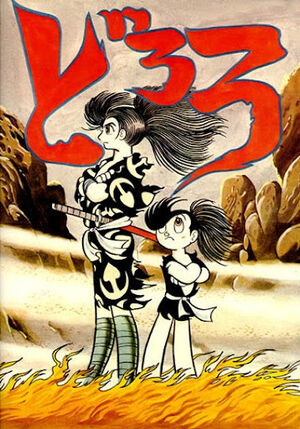 Dororo (どろろ, Dororo) is a Japanese manga series written and illustrated by Osamu Tezuka, who is largely considered to be the godfather of Japanese comics (manga). Dororo is considered a classic, even inspiring Blood Will Tell, a "cult-hit" video game.

Daigo Kagemitsu, who works for a samurai general in Japan's Warring States period, promises to offer 48 body parts of his unborn baby to 48 demons in exchange for complete domination of the country. When the baby boy is born, Daigo has him thrown into a river, hoping the boy will die. A doctor, however, finds him and adopts him. The kind doctor outfits his poor son with prostheses and educates him with simple knowledge.

As time goes by, the baby grows into a young man who calls himself Hyakkimaru. Every time Hyakkimaru eliminates a demon, he retrieves one of his missing body parts. Hyakkimaru then meets a young thief named Dororo, who has his eyes on the blades attached to Hyakkimaru's arms. Dororo follows Hyakkimaru as he seeks opportunities to steal his sword. Throughout their adventures together, their bond grew further than the sword; they look out for one another, traveling the countryside to hunt for demons.

Community content is available under CC-BY-SA unless otherwise noted.
Advertisement