View source
watch 01:36
We're Getting Mutants in the MCU - The Loop
Do you like this video?
Play Sound

James Belcher
Biwamaru (琵琶丸, Biwamaru) is a blind, traveling lute priest and an ally to Dororo and Hyakkimaru. Previously it was alluded that Biwamaru was a samurai while speaking to Dororo in the final episode.

Biwamaru is a blind elderly monk. He is bald and has no eye colors. He wears a ragged white shirt and black pants for his outfit, and wooden sandals for his footwear. He carries a biwa on his back and holds a cane sword.

As a blind individual, Biwamaru is calm and collective. He is kind and advisable to people. He has knowledge of Hyakkimaru's past. When learning Hyakkimaru killed Kagemitsu's troops, Biwamaru advised him to be careful when involved with bad people. He considered Kagemitsu Daigo pact with the demons as rubbish. 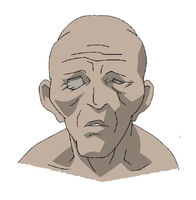