View source
watch 01:36
We're Getting Mutants in the MCU - The Loop
Do you like this video?
Play Sound

Koyama Mami
Bandai (万代, Bandai) was one of the twelve demons that made a contract with Daigo Kagemitsu. It was the demon that took Hyakkimaru's touch and pain.

In her human form, she is a middle age woman that almost reach to old age. When transformed, she takes the form of a salamander. It uses its hair to grab bamboos to throw at people and can also use it as a spear to piece through any part of the human body.

Bandai terrorizes a village into giving her cover; she acts as their sick chief to lure travelers in and devour them.

Bandai's Statue in Hall of Hell. 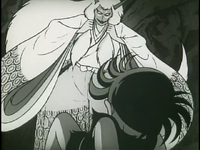